Email Us nityachetan@gmail.com
Call Us Now For
Enquiry
+91 8951056314
Menu
Articles on Nityananda, Uncategorized

VOICE OF THE SELF (CHIDAKASHA GEETHA)

Descent of God into the world takes place often. But the amount of perfection manifested will depend upon the type of age, and the purpose for which the divine incarnation has taken place. Forced by nature, hurling down to the dust of earth to live there in an earth bound life are the men of bondage – Nithyabandha purushas. Sent down by the Lord and coming down floating like a parachute descent are the perfect masters – Nithyasiddha purushas. One who with freedom, ease and grace like the eagle roaming in the heights as they like, now and then sweeping down the earth, to clean and to purify it, is the royal descend of the incarnations – Avatara purushas.

These three types constitute the highest manifestations of truth upon the surface of the earth,. The majority are the ” me of bondage “. A few are ” perfect men” belonging to the second group, while a handful of instances have been noticed in the history of man, where in we can recognise fully the manifestations of the divine in the form of ” incarnations “.

Swami Nithyananda of vajreshwari no doubt belongs to the type of siddhas. But there are flashes in him of the qualities and beauties that really belong to the avatars.

The vision of the world as experienced by such perfect men of self – mastery should necessarily be totally different from our ordinary understanding of life, because we look at things and happenings through our mind coloured by our own personal interests and attachments. Distorted by these we get a perverted vision of the fields of experience, while the ” perfect men” eliminating the imperfections in themselves look at life from the harmony that they are experiencing in themselves and discover a concord and a joyous love in the world around. When such men declare their vision and expound their point of view, we gain a new scripture each time.
Swami Nithyananda after his own self mastery roamed about in the country expressing through his own presense and activities a magical charm and perfect mastery over even the phenomena of nature. His command was to be obeyed. His words were wisdom. His actions had a peculiar flavor of his own personality. This great saint, who ultimately came to settle down in vajreshwari, in the early days of reached Mangalore. His conversation held at random with his disciples and recorded in Kannada faithfully by a cultued lady disciple, Tulasi Amma became a scripture for those who knew him and followed his path. These recorded snappy declaration got in time translated as far as I know, into Marathi, Malayalam, and English. 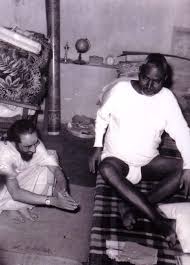 In 1960 when I visited vajreshwari, the saint had commanded that I should take up the translation of this great work. I tried but my own limitations complelled me later to approach his divine feet and confess my inability to bring out fully the deep significance of his chiselled ideas. Swami Nithyananda did appreciate the spirit in which I confessed and he then said : ” why worry ? All will be done – you will see ”

When now all of a sudden Sri P Ramanath Pai of madras, close devotee of Swamiji from his boyhood days met me in Bangalore and in due fulfilment of the benign command to him by the saint to bring out an English version, presented me with Sri M P Pandit’s (of Sri Arbindo ashram at pondicherry) liquid translation (Voice of the self) I knew that it must be the Devine work of the deathless Yogi Nithyananda.

I had gone through the entire translation, they are vivid, brilliant, and even inspired. I can perfectly remember some of the portions of the translation were Sri Pandit has moved away from the original version and in all those places, I know that he had his pen forcefully snatched away from him by the ever living presence of swami Nithyananda . In and through these crisp words, I see the sparkling eyes of the yogi of vajreshwari, his detached life of perfection in which to him the work outside was only the activities of his body.

A scripture should contain generally four parts (a) the goal is to be initiated, (b) man as he is now is to be painted, (c) the path by which the now imperfect can reach the goal of perfection and (d) what would be the man of perfection’s attitude to the world after achieving his goal. All these four limbs of a scripture are amply met with in this book – Voice of the self.
Though mentions are made of the Hattayoga methods, Karma, Bhakthi and Gyana are the very corner stones of this sacred temple of self built here in. Even the highest students of philosophy will find it difficult to question the authority of yogi Nithyananda’s statements – they are so firmly built upon his own intimate and first hand experiences.
Swami Nithyananda is one of the rarest jewels among the Saints of the recent India. Illiterate and uneducated though he was from the standards of the modern concepts of education, he was one of the most cultured men who threw stones at others and blessed them both in their material life and in spiritual awakening. To repeat the actual experience of his devotees, the strange method the yogi evolved the seemingly mad acts he did would read a saga of a hundred christs living together each exhibiting his wonderous powers in ameliorating the sufferings of the poor. At vajreshwari on the jungle banks of the hot water springs, this saint, some 50 miles away from Bombay, has built a township and in the veranda of his hutment lived and worked to bring consolation comfort and cure to the suffering lakhs that reached his feet. In dignified peace and smiling demure the saint left his body manifestation and entered mahasamadhi last year on 8th August 1961
His intimate devotees need not now feel his absence because the voice of the swisher swami Nithyananda , the ultimate

1 thought on “Voice of the Self ~ By Swami Chinmayananda”